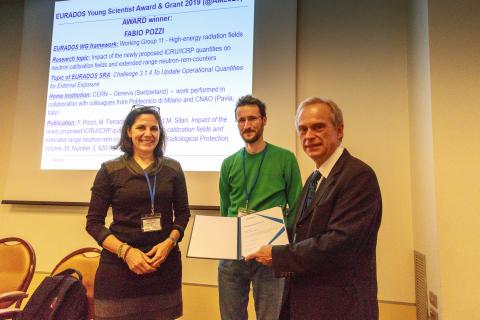 photo:Fabio (in the middle) receives the YSA from EURADOS Chairperson Werner Rühm and Council member Elena Fantuzzi who chaired the Election Committee.

The European Dosimetry Group, EURADOS (www.eurados.org) is a network consisting of almost 80 European institutions including CERN and more than 600 scientists, which promotes and coordinates research activities on radiation dosimetry at the international level.

Fabio Pozzi, who works in the Accelerators & Sites section of the HSE-RP group, has been this year’s recipient of the “EURADOS Young Scientist Award” for his research work on the impact of the newly proposed ICRU/ICRP radiation protection quantities on neutron calibration fields and on the response of extended-range neutron rem counters. The former include radioisotopic sources such as the AmBe source available at the RP Calibration Laboratory, and the CERF facility installed in the SPS North Area, run by RP group. The latter includes instrumentation routinely used at high-energy particle accelerator laboratories to monitor exposure to high-energy neutrons as well as exposures to high-energy radiation on board aircrafts.

Fabio received the Award during the EURADOS General Assembly in Florence on 29 January 2020.

HSE shares the pride and joy of the recognition of Fabio’s outstanding achievement.  Congratulations to Fabio!