Monitoring stations are sets of dedicated probes, specific electronics, and communication systems that automatically send data of predefined relevant parameters to a supervisory system for on-line display, archiving and analysis. For each monitored parameter, specific alarm thresholds are set to trigger the intervention of the HSE Unit and in some cases the intervention of the CERN Fire and Rescue Service.

At present, 130 monitoring stations provide the remote supervisory system with data from 640 on-line channels that monitor environmental parameters relevant to CERN activities, such as: 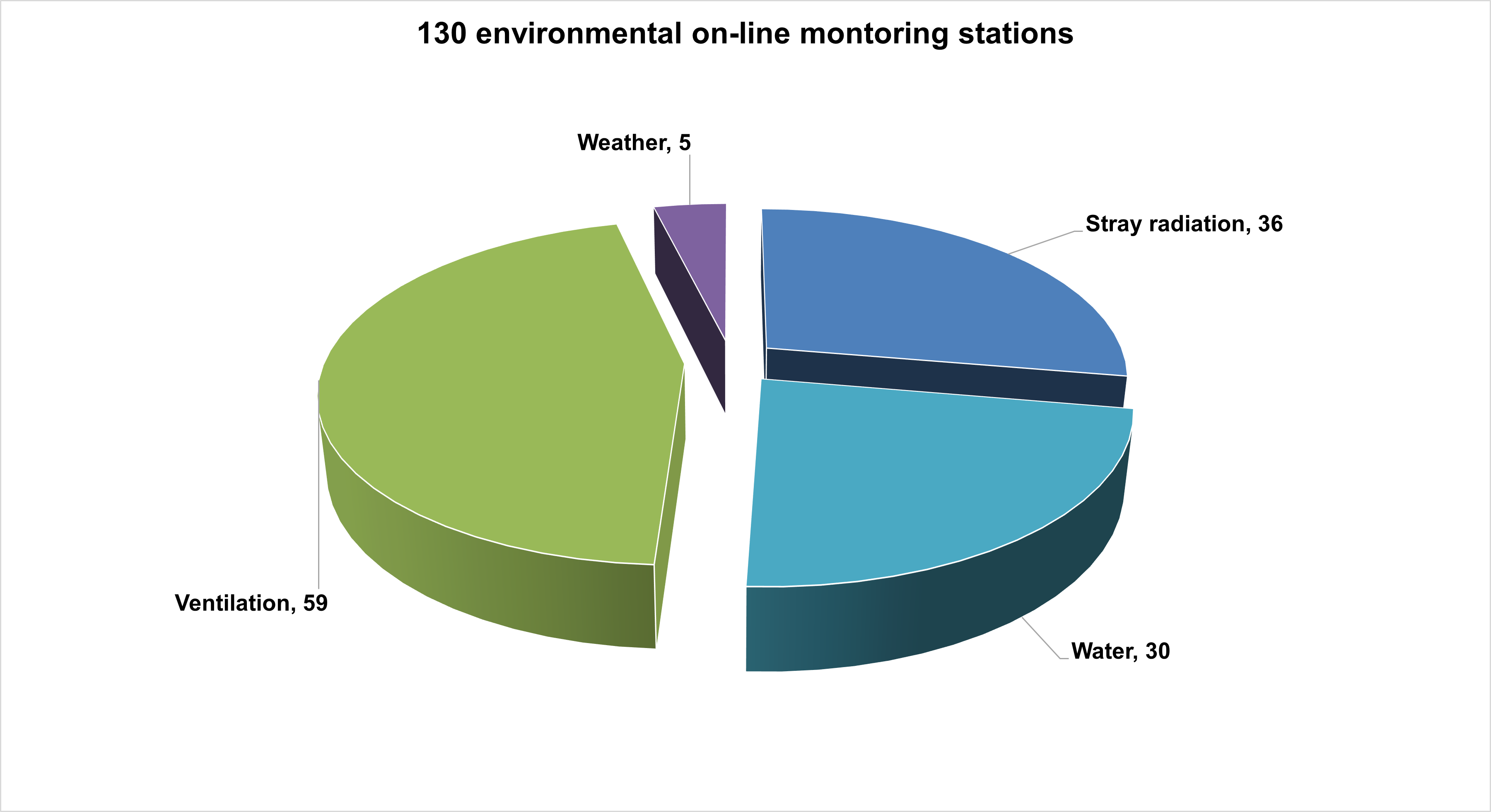 Stray radiation results from high energy particle beams that can generate secondary particles such as photons, muons and neutrons, which can potentially reach the environment. This stray radiation, that ceases when CERN's accelerators are stopped, is added to the omnipresent natural radiation. CERN has 36 on-line stray radiation monitoring stations that are spread over the CERN sites. In addition, this monitoring network is completed with passive dosimeters (Thermoluminescent dosimeter, TLD) that are exchanged and measured on a quarterly basis to check the level of stray radiation.

Accelerator installations (including experimental halls, transfer tunnels, etc.) need continuous ventilation and air renewal, especially in closed areas like tunnels. Atmospheric releases of the ventilations are continuously monitored by on-line gas monitors. The controlled parameters are short-lived radioactive gases (i.e. 11C, 41Ar, etc.). The on-line monitoring system collects a sample of air from the ventilation exhaust through a sampling line, for which the flow rate is regulated in order to control the volume of the gases.

Water is mainly used on the CERN sites for cooling purposes, but also for more common sanitary and industrial usages. Two discrete networks are in place at CERN to release water: the site drainage network, which receives cooling, meteoric and infiltration water, and the sewage drainage network, which receives sanitary and industrial process water. The effluents flowing into the site drainage network are discharged from CERN sites into local watercourses in a controlled way. The water quality monitoring programme at CERN includes the continuous monitoring of gamma-emitting radionuclides and conventional parameters such as temperature, pH, turbidity, conductivity, and presence of hydrocarbons or foam.

The weather conditions are monitored by several meteorological stations which record temperatures, heat fluxes, wind speeds and directions. Recorded parameters are used to calculate the dispersion coefficients of atmospheric releases by means of widely recognised standards.

Our projects listed in KT