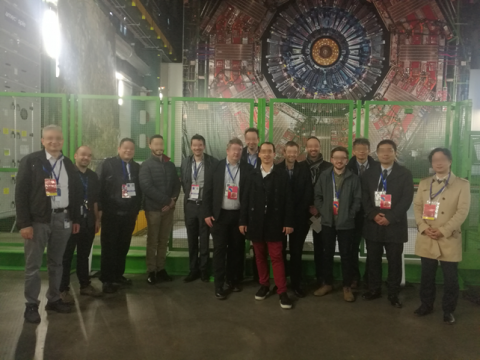 Since 2018, CERN has been part of a working group which objective is to define regulatory values for the transport of radioactive goods. This working group is part of the radioactive Transports Safety Standards Committee (TRANSSC) of the IAEA. In this context, participants from several countries including France (IRSN), Germany (GRS), the United Kingdom (PHE) and Japan (NSR) meet twice a year. On the 23rd and 24th of October 2019, CERN organised one of the meetings of this group.

The discussions during the CERN meeting focused on the improvement of the methodology to calculate regulatory values for different radionuclides. T. Frosio and P. Bertreix from CERN’s Radiation Protection Group have developed a novel approach for calculating such values based on Monte Carlo simulations and transfer functions convoluted with nuclear databases. This approach was initially developed for radionuclides produced at MEDICIS, which are not covered by the current IAEA standards. It allowed CERN to integrate the working group. T. Frosio and P. Bertreix further developed a software conceived specifically to compute these regulatory values based on transfer functions and nuclear data.

The meeting also provided an opportunity to present CERN’s activities and the specific challenges the Organization faces with respect to the transport of radioactive materials. The participants also enjoyed a visit to CMS and the Synchrocyclotron.